Moving Violations in Maryland: Should I Pay My Ticket, Request a Waiver Hearing, or Request a Trial? 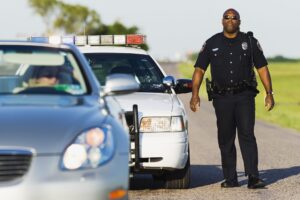 Discover how to address a moving violation in Maryland.

Moving violations in Maryland vary in severity. Some call only for the payment of fines while others call for jail sentences that require offenders to appear in court on a designated trial date. For moving violations that carry no penalty of incarceration, offenders can elect one of three options that are specified on their citations, including paying a preset, designated fine, electing a waiver hearing, or requesting a trial. The following is a brief discussion of each option and its potential consequences. Regardless of one’s election, action must be taken within 30 days of a citation’s issuance to avoid suspension of one’s driving privileges for failing to comply with one of those options.

Traffic citations for non-jailable offenses will note a preset, recommended fine for the offense. This preset fine often falls below the maximum fine established by law – and one that could be imposed by a Judge in court. However, avoiding the courtroom and paying the recommended fine is tantamount to pleading “guilty” and will result in the imposition, by the MVA on one’s driving record, of any “points” associated with the offense. Consideration of how many points are associated with a conviction, one’s existing driving record, possible insurance rate increases, among other factors, should be carefully weighed before electing this option.

One’s request for a waiver hearing results in a trial date but excuses the Officer or Trooper who issued the citation from appearing in court. Essentially, one is appearing in court only to plead guilty or “guilty with an explanation,” with the hope that one’s explanation, prior good driving record, etc., will persuade the Court to impose less than the pre-set fine and/or withhold a guilty finding from one’s record. The imposition of Probation before Judgment (“”PBJ”), is a special disposition, typically reserved for those with clean driving records or the absence of recent offenses, which can still result in fines and court costs, but avoid the imposition of points by the MVA. Since a PBJ is not a “guilty” finding, no conviction is reported by the Court to the MVA. However, by accepting a PBJ, one gives up the right to file an appeal, since there is no “judgment” upon which an appeal would be based.

When requesting a trial, the Trooper or Officer who issued the citation is required to appear in court and offer testimony concerning the offense. If the Officer fails to appear and provides the court will no valid reason in advance for his absence, the court in its discretion can either dismiss the citation or accept a not guilty plea and acquit the offender for insufficient evidence. If the Trooper or Officer does appear, one can proceed with a trial or tender a guilty plea with an explanation. Based on the factors discussed above, PBJ remains a possible outcome regardless of one’s election.

First, there is never a compelling reason to elect a waiver hearing over a trial. Why give up the right to compel the Officer or Trooper’s appearance in court when you must appear? Why give up the chance to seek a dismissal or not guilty finding if the Officer or Trooper fails to appear without prior excuse or explanation? Always request a trial rather than a waiver hearing!

Second, it’s a good idea to consider representation by an attorney. An attorney can properly evaluate the facts, challenge the evidence when indicated, and best present one’s background to mitigate punishment or avoid a conviction altogether. Additionally, whether a waiver hearing or trial is elected, an offender can avoid appearing in court altogether and have counsel appear in their stead. Out-of-state residency, travel distance to court, job responsibilities and scheduling conflicts, among other reasons, may dictate that counsel appear on one’s behalf. Such circumstances should always be addressed when you hire counsel to assist you.